So, the components arrived for the down Dot Matrix Controller board that originally came out of a Party Zone. It was missing +62VDC which causes the display to come up as completely blank.

Since Party Zone is a location game and down time is money to the owner, I sold him my working Dot Matrix Controller board out of my Fish Tales and just dealt with one down game for a few days. Believe it or not, though I do a lot of repairing, I don’t play my games that much.

Since our fuse and BR1 tested fine with a DMM, those were not touched. Resistor R11 tested fine in circuit with the DMM as well, so I also left it alone. The components I replaced in this repair which tend to be the most possible suspects were: Resistors R3, R4 and R12; Transistors Q2 and Q3; Zener Diode D3; and I decided to replace the Capacitor C4 since I had it on hand. 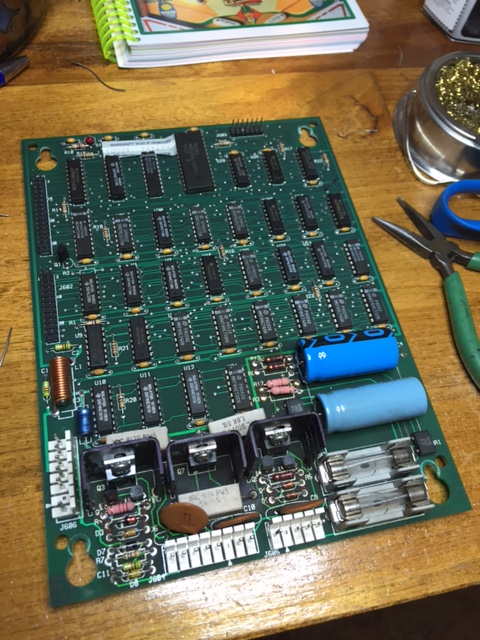 Replaced components on the Dot Matrix Controller board on bench.

One of those components ended up being our faulty issue, as once the board was popped back in game, Fish Tales came alive. 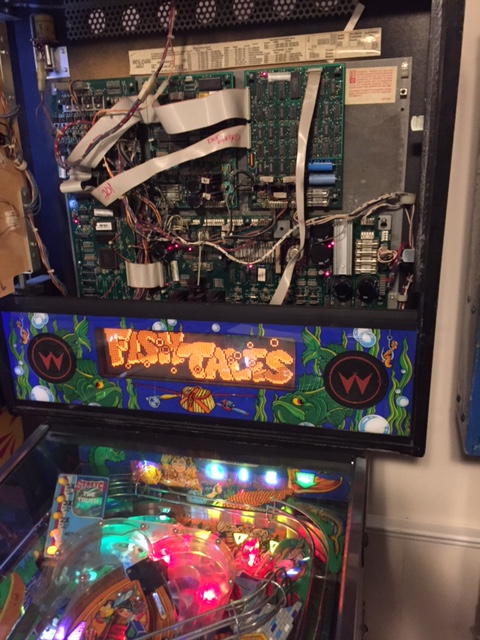 Working DMD in Fish Tales after repair to DMD Controller board.

Matthew is a cinematographer and video specialist by day and pinball fanatic at night. Somewhere in between he also finds time to play the guitar, collect vinyl records and watch a good deal of movies and TV shows.
View all posts by Matthew Mandarano →
This entry was posted in General, Repairs and tagged DMD, Dot Matrix Controller Board, Fish Tales, NC, north carolina, Pinball, repair, Williams, Winston-Salem. Bookmark the permalink.