Posted on February 17, 2016 by Matthew Mandarano 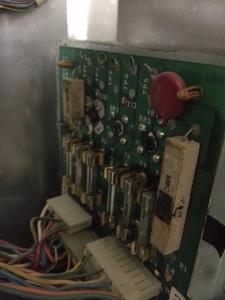 Fuse F4 is the solenoid fuse in the Bally Power Boards.

Got a call for a non-booting Silverball Mania. I figured I’d be in for the typical corrosion damage on the MPU repair, as this one had had some at one point but had been neutralized and repaired in the past.

Turns out, it wasn’t a locked on MPU or corrosion as the culprit. The MPU LED blinked six times, but never made its seventh flash which means the MPU wasn’t recognizing the +43VDC as present.

Several issues can cause this, but in this case it was a blown F4 fuse on the rectifier board. In case there was a short from the playfield or a shorted BR3, I plugged in my 3amp circuit breaker fuse first before replacing the blown fuse with a 5 amp slow blow to spec. This brought the seventh flash and allowed the game to boot.

This game was in great shape overall. Clean, bright displays and an upgraded board set with remote pack and bulletproofed solenoid driver board. I checked all the switches and solenoids to ensure proper operation and was off to the next call! 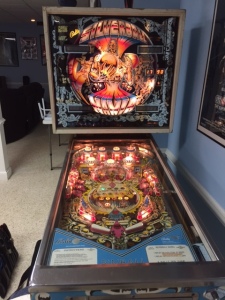 Silverball Mania back up and running with all seven flashes present on MPU.

Matthew is a cinematographer and video specialist by day and pinball fanatic at night. Somewhere in between he also finds time to play the guitar, collect vinyl records and watch a good deal of movies and TV shows.
View all posts by Matthew Mandarano →
This entry was posted in General, Repairs and tagged bally, MPU, NC, north carolina, Rectifier Board, repair, Seventh Flash, Silverball Mania. Bookmark the permalink.